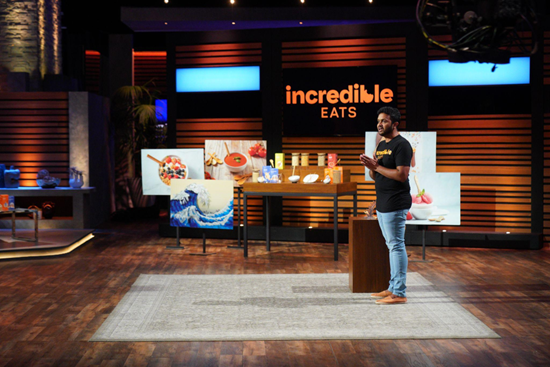 Ditch the Plastic Eat Your Spoon

100 million pieces of plastic cutlery are thrown out every day in the United States. An engineer by day and food industry trailblazer by night, Dinesh Tadepalli is on a mission to reduce that number in a fun, innovative, and eco-friendly way. As co-founder of IncrEDIBLE Eats, Tadepalli is reinventing the way we eat our food by replacing single-use plastic cutlery with edible cutlery.

A Trip to Get Ice Cream

What seemed like a simple trip to get ice cream with his two kids would actually become an outing that set Tadepalli on a life-changing path. Here’s the scoop: while at the ice cream shop near his home in California, Tadepalli noticed a mountainous pile of plastic spoons in the trash can. Tadepalli then had what many entrepreneurs may call the ‘lightbulb’ moment, asking himself, “why am I using a spoon for ten minutes that will spend thousands of years in a landfill?” Even as the plastic crisis mounts to incredible heights, many people still don’t think twice before using single-use plastic. Plastic is seeping into every corner of the world, affecting public health, wildlife, oceans, and worsening climate change. Tadepalli’s question is, why aren’t we thinking about it? While the consequences of plastic pollution may not all be felt in his lifetime, his main motivation to reduce plastic pollution is his desire to keep the planet healthy and livable for his two kids.

After his epiphany, Tadepalli’s next step was to find a solution to the problem in an unconventional way. Many establishments now have compostable or biodegradable spoons, but they are often examples of greenwashing. This is when companies market their products as environmentally friendly, when in reality, they aren’t actually being sustainable. For example, these spoons only decompose when taken to the correct facilities, which some cities don’t even have. Further, studies show that biodegradable cutlery emits methane gas when it decomposes. Unfortunately, such spoons rarely capture the interest of people outside the environmental community. Therefore, it seems as though these new inventions reek of problems. In contrast,  Tadepalli came up with a revolutionary idea for sustainable cutlery: a spoon you can eat. Not only would it reduce waste and life-cycle emissions, but it also has an element of fun that excites non-environmentalists and environmentalists alike.

While the spoon has undergone a few different versions, the present model comes in five different flavors: chocolate, vanilla, plain, black pepper, and oregano chili, so whether you are eating something sweet or savory, there is a spoon for you. For the record, Tadepalli’s favorite spoon flavor is vanilla, especially with some butter pecan ice cream. All of the spoons are composed of the same basic ingredients: flour (wheat, brown rice, corn, chickpea, and oat), as well as a small amount of sugar. They are 100% vegan and are durable for up to 30 minutes in cold or hot foods and liquids.

After coming up with this innovative idea, IncrEDIBLE Eats was born, and Tadepalli set out on a journey to find a manufacturer for edible cutlery. After a year of searching, he found his partner, Kruvil Patel. Also known as the “Chief Spoon Maker,” Patel resides in India and is the brains behind their India-based spoon-making machine. After they figured out a way to manufacture the spoons at scale, Tadepalli began marketing the edible spoons at food trade shows across the United States, specifically to quick-service restaurants and of course, ice cream shops. Once in the US, Tadepalli met a new member of his team, Jack Kneubuhl, who is now the VP of sales and Tadepalli’s only partner in the US.

Before he knew it, their first order – of 150,000 spoons! – came in. As a small-scale company that made only 100 spoons a day, this would be no easy feat. They needed to scale their facility immediately, and to do so, Tadepalli sold his home in California with the help of his wife, who has been a constant supporter of his dream. This risk gave them the money to scale and fulfill the order in just five months. They now reside in Morrisville, NC, which is where Tadepalli runs IncrEDIBLE Eats.

Soon, Tadepalli found himself swimming with sharks, when after a food trade show in San Francisco, the edible spoon caught the eye of the producer of Shark Tank. In season 13, episode 3, you can watch Tadepalli take his company to the next level as he receives four offers from the sharks. The deal ultimately did not work out, but this episode still had an immeasurable impact on the company, bringing them publicity, legitimacy, and credibility and giving IncrEDIBLE Eats a huge leg up in the food industry.

IncrEDIBLE Eats is on a mission: to change the choices you have about waste so you don’t have to think twice before digging into your next ice cream– rather than putting the environment on the back burner to ramp up production and make amends later, this mission has driven the company from the very beginning.

Tadepalli’s goal is to replace 100 million plastic cutlery with edible cutlery by 2025, and in fact, he has pledged to not take any money from the business until reaching that goal. Right now, the company has replaced about 3-4 million spoons and continues on the upward climb of changing the plastic narrative.

“As an individual, I care about my footprint. Similarly, I need to make sure that as a company, our footprint matters too.”

IncrEDIBLE Eats’ most notable sustainability initiatives are its plastic and carbon-negative certifications. Since the product is manufactured in India and shipped to the US, emissions are created. So, the company offsets its carbon emissions by 200% by supporting various carbon offset projects with the help of a third-party company.

In the food industry, it is nearly impossible to avoid plastic usage during transport as it is used to preserve the food, and many times the companies transporting the food don’t offer recyclable packaging. Similar to carbon emissions, IncrEDIBLE Eats offsets its plastic usage by 200%. For example, if 100 kg of plastic is used in the transportation of their product each year, it works through a verified third-party organization to take 200 kg of plastic out of the ocean for it to be properly recycled or repurposed.

The team’s commitment to reducing environmental impact does not stop there. In food production, some spoons inevitably break. To prevent these from ending up in the landfill, they donate the broken spoons to animal shelters in India, so even the animals get to play a part in the plastic-free revolution.

Tadepalli further shows his commitment to sustainability with his efforts to use sustainable ingredients. Currently, IncrEDIBLE Eats uses virgin wheat, oat, and chickpea flour in its spoons. However, Tadepalli is currently in the process of integrating upcycled flour into their spoons instead. Tofu production creates a byproduct known as okara flour. By partnering with tofu companies, Tadepalli envisions a new destination for this byproduct by using it in the spoons rather than sending it to a landfill.

IncrEDIBLE Eats’ impact goes beyond just the environment, as seen in its efforts to address other pillars of sustainability. In India, the company strives to hire women in areas where people live on less than $5 a day. By providing these women with a full-time opportunity with good compensation, the team hopes to address gender inequalities and increase economic mobility.

Like with all startups, building IncrEDIBLE Eats came with its fair share of sacrifices and challenges. Working in sustainability, though, offers a unique set of challenges.

As consumers, we are conditioned to look for the cheapest alternative, and oftentimes we don’t have much of a choice financially. This is where Tadepalli’s biggest challenge lies: cost. Plastic spoons sell for about 1 cent each, which is incredibly cheap and makes it difficult for alternative options to be competitive in the market.

The spoon-making machine has scaled up tremendously, yet Tadepalli and his partners are still working on fuller automation to help lower the cost of each spoon to 10-12 cents each. Meanwhile,  the team has developed a strategic business model that makes their product more appealing to stores. By requesting stores to upsell the spoon – i.e. including an edible spoon as a topping or including it in the price of the item automatically – the consumer’s behavior is challenged. Now, they have to decline to buy an eco-friendly and fun option and voice that they would prefer a plastic spoon, a clearly less attractive and ethical option. This highlights an interesting aspect of the sustainability industry: the challenge is not just about selling the product, it is about undoing the consumer behavior of convenience thinking – which is not changed overnight.

However, Tadepalli’s engineering background gives him an advantage, as it’s common practice in the industry to test a product several times before releasing it. Unlike in the food industry, where the product scales more quickly. Thus, the current edible spoon available for purchase has undergone four revisions, each of which has allowed Tadepalli to receive feedback from consumers on how the product can be made better. Through this process, Tadepalli has proven that he is less interested in his product being a fad and hopes to see edible cutlery become a mainstream commodity. Despite his advantages as an engineer, Tadepalli has not always found it easy being an outsider in the food industry. Coming from a more serious engineering crowd, Tadepalli was surprised by the jovial nature of people in the food industry. It took courage for him to adjust to a new industry while still staying true to his values.

One of his biggest challenges, however, has been spending less time with his kids. To support his family, he continues to work a day job as an engineer, leaving the nighttime hours devoted to building IncrEDIBLE Eats. However, his biggest motivator continues to be his kids, as he hopes that building this company will provide a future for them where alternatives to plastic are the norm.

Tadepalli is continuing to revolutionize the food industry one spoon at a time. But that’s not all. In addition to introducing edible sporks this year, the team is now developing edible chopsticks and straws, which are in their critique phase. With the introduction of these new items, the company plans to make greater strides to reach their goal of 100 million units of edible cutlery sold.

IncrEDIBLE Eats has also caught the eye of Dippin’ Dots, an international ice cream brand based in the US. As a result, a new partnership is starting, and IncrEDIBLE spoons are being sampled and distributed to Dippin’ Dots locations across the entire country.

Looking back on his journey full of hard work and sacrifice, Tadepalli says a supportive family and innovative team have led to his success. That, and the knowledge that nature provides luck and good fortune to those who protect it.

Interested in learning more or trying the edible cutlery out for yourself?

Liz Barteldt is a sophomore at UNC Chapel Hill majoring in Environmental Studies and pursuing a business minor. She is interested in private sector sustainability and as such, is Vice President at UNC Sustainable Business Club and works at Kenan-Flagler’s Ackerman Center for Excellence in Sustainability. Her favorite part of working at Heart of Waraba has been connecting with and learning from successful entrepreneurs about the logistics of making a business sustainable.