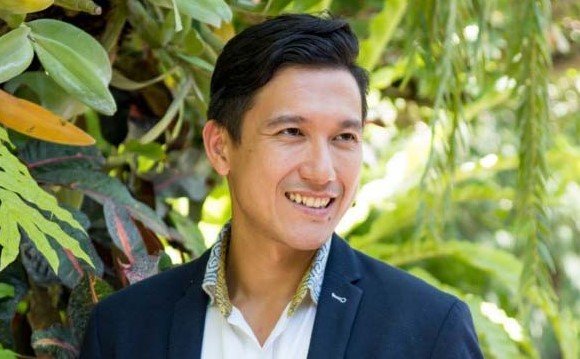 Jerry Winata thinks holistically and takes risks to increase sustainability for small islands in Indonesia, leading change for nations around the world.

Waves ripple at the sandy, porcelain-colored shore of the Bawah Reserve in the Anambas Islands of Indonesia. Ocean waves are energy in motion, and they are the perfect metaphor for Jerry Winata, a passionate nonprofit entrepreneur committed to making his home country of Indonesia more sustainable.

Winata runs the Bawah Anambas Foundation. The focus of his nonprofit is inclusion of the community. Combined with a risk-taking approach, the foundation helps to create ripples near and far.

A Little Fish in a Big Sea

Winata has a background in communications and holds a master’s degree in information science. He worked on HIV/AIDS for an NGO and then got noticed by the World Bank, where he spent years working on poverty alleviation and grassroot local development. Winata also worked on issues like attrition and disaster response for the World Food Program, part of the United Nations. Then he moved to a consulting job.

“I truly believe that there should be a better connection between private sector entities and development agencies. There’s something that I’m always passionate about – what is that sweet spot on the public-private partnership?” said Winata, who has held all of his public and private sector roles in Indonesia.

“What I realized is that there’s a lot of private sector entities whose hearts are in the right place, but they just speak different languages. So we actually try to achieve the same thing. And just by becoming sustainable or more conscious about environmental [and] social [issues], doesn’t mean that you have to run a nonprofit, you can actually go on profit,” explained Winata. This understanding explains how he moved to working for a nonprofit, the Bawah Anambas Foundation, that works closely with a for-profit business, the Bawah Reserve.

After working at a consulting firm for a couple of years, Winata took time off to travel, mostly through the United States, Europe, and parts of his home country, Indonesia. It was then that Winata developed a passion for marine conservation.

The Formation of a Wave

The Bawah Anambas Foundation started when Winata met a woman at a party who would be a critical twist of fate in Winata’s life. He and the woman had mutual friends, and one year after meeting, she reached out and introduced him to the owners of the Bawah Reserve, a small, upscale resort with 35 suites. One owner was Tim Hartnol, who discovered Bawah Island on a sailing trip. Its beauty was like a Siren, luring him to stay there and conserve it. Similarly, the other owner, Matthew Chapman, valued the untarnished natural landscape and wanted to do more to preserve it as soon as he learned about it. The owners struck Winata as people of integrity and compassion for humans and the environment. They wanted to become more sustainable and engage with the community.

“I was so impressed with their genuine commitment on sustainability and their apparent love for nature,” remarked Winata.

However, the creation of the Bawah Anambas Foundation was not a simple walk on the beach.

Winata proposed a three-month research project to improve sustainability at the reserve. During this time, he lived in two villages in the Anambas to get to know people. The region consists of about 45,000 people across 255 islands.

From his research, he better understood the people and nature of the islands and how to increase sustainability there.

For example, natives see the foundation’s integrated waste management plan, which involves composting food waste, like leftover vegetables, and using it to grow organic vegetables. The natives then compost by themselves at home.

Winata understood the necessity of listening to the community from the start.

The Bawah Reserve did not have a good reputation with the local community because to the natives, they seemed like they were from a different world. As a result, Winata felt distrusted and resented when he began his research.

“I am considered a foreigner because I look a bit different. I don’t speak the dialects, even though they all speak Bahasa Indonesia, which is our national language,” said Winata.

The community members also felt threatened by Winata’s conservation project from the beginning because they suddenly could not fish. The regulations had been there before Winata came, but he started enforcing them to repopulate the fish stock. However, the natives did not understand the purpose of the ban and viewed the Bawah Reserve as the enemy.

Although the natives were wary when Winata came from Bawah, one interaction justified his time spent learning from the natives before diving into conservation. He had insisted on paying a native for staying with them and getting lunch, but the native refused.

Winata said, “What she told me really struck a chord because she said, ‘Listen. I didn’t know you then, and you came to my house … and you stayed with me for four days, and all you did is try to understand us. I didn’t hear you telling us to do stuff. You asked a lot of questions.’” In other words, the native said she was glad Winata was there to learn and not impose his culture on the natives.

Since Winata began the foundation in 2018, it has grown to help the natives. Guests at the resort can travel to the outer islands and teach the natives English. Then the guests are enthusiastic about returning and seeing how they have impacted people, so it is beneficial for the natives, guests, and resort. The foundation takes on many initiatives to create an impact, from its integrated waste management to reducing plastic to supporting women entrepreneurs.

“The main aim is to improve the overall ecosystem and environment. We keep asking this question, what should we prioritize, planet versus people? We ended up learning as an organization that it’s critical to start with people, to empower people. In terms of our project approach … it has to be good for the environment, but we cannot forget about the people,” explained Winata.

While the foundation supports the community, it enables natives to take action themselves. “We, the foundation, will not do everything ourselves. We stick to our core by ensuring that the community has to be part of this. Even if it means a lot more pain for us because we’re really empowering them first,” said Winata.

Winata said his vision is not to make the foundation a huge organization. For example, the integrated waste management program is directed specifically for an island community. But he said that the foundation can develop a successful blueprint that other islands can use, even though every island will be a little different.

He said many places outside of Indonesia, like the Philippines and other islands in the Pacific, face the same challenges to manage waste. He would like to spread a blueprint so other places can implement integrated waste management.

“It’s not about us. It’s not about the foundation. We would like more people to implement some of the things that we have done,” said Winata. The foundation is just a beginning, but it can form waves that lead to changes in other places.

Even Strong Waves Can Crash

“Moving forward, what we’re trying to do with the foundation right now is that we are trying to be innovative. We’re trying to recreate it. We’re trying to think outside of the box. It’s almost like we’re a laboratory for the Anambas, which is the area we’re in. What we have as a foundation and what I have personally as the head, that I’m very fortunate to have, is the ability to fail,” said Winata.

His bosses, Chapman and Hartnol, have given him space to experiment. Since the reserve has the money to try new plans, it can take risks that can help other places be more sustainable.

Winata said Chapman and Hartnoll let him “create stuff, try things, be a bit crazy, be a bit unorthodox, be a bit more unconventional to try to come up with solutions.” He explained that the foundation has to have specific goals to be successful when it takes risks.

Winata’s focus is not on solving world problems but rather finding solutions for small and remote islands. He said, “There’s so many amazing solutions and innovations for waste management, but none catered for small island communities … People tend to forget or tend to think it is too much risk of an investment, because the amount of investment required is pretty much the same [as for a big island], but the return on it is very tiny because instead of serving a million people, the solution might only serve 200 to 1,000 people.”

As he continues on this journey to innovate on islands, he said the amount of learning “is overwhelming and it brings a whole new level of humility.”

It is no wonder he is learning so much since he has a broad role. At the foundation, Winata said he is “wearing two hats. I’m running this nonprofit that focuses on the community level on the outside, but I also still play a role as the advisory role on sustainability to this amazing resort.”

Bringing it to Shore

There are three pillars of sustainability: environment, social, and economic. Winata said many people tend to forget about the latter. He explained that the foundation is not a charity, but everything it does should be an investment and “should bring concrete economic benefits to the resort,” which will in turn allow it to continue helping the other aspects of the pillar by promoting conservation and helping the community.

Even small waves can travel far distances, carrying energy and water from small islands of Indonesia to far flung places across the ocean. It is not surprising that in our world that becomes smaller every day, the wave of Jerry Winata found me in my home of Apex, North Carolina, in the United States. Winata’s passion and drive have inspired in me a continued appreciation for marine conservation and inclusion of the surrounding community.

Methods for increasing sustainability are characteristic to different places, so when implementing sustainability programs, we must adapt by listening to and understanding people. Islands are unique and often isolated places that require such plans. While Winata has started at small islands in Indonesia, his work can still be impactful across the ocean.