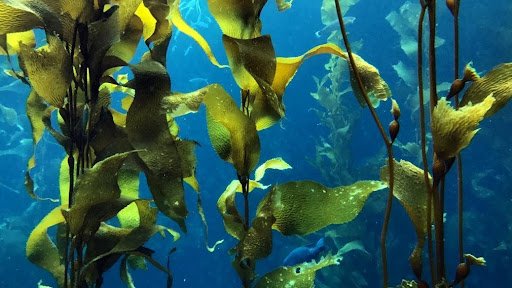 Sewing Seaweed: A Revolution in Textiles

Is that new pair of jeans you really don’t need tempting you? This might help: In 2018, 11.3 million tons of textiles were landfilled in the United States alone. The sustainability issues related to textile production have become a significant concern for both businesses and consumers, as the manufacturing processes for conventional textiles are extremely resource-intensive. Including the fact that grave environmental justice issues are often associated with textile production and distribution, the clothing and fashion industry poses a substantial threat to the wellbeing of our planet, socially and ecologically. How do you feel about those jeans now?

Thankfully, Tessa Callaghan and her team at AlgiKnit are working to improve the sustainability of the textile and fiber industries, innovating upon the conventional production methods of raw materials that are currently in place. After graduating from Greenwich High School and moving on to the Fashion Institute of Technology in New York City, Tessa began her studies in fashion design, eventually focusing on textiles during her third and fourth years as an undergraduate. As Tessa told me, there are many nuances to textiles, ranging from construction to structure to material and more; the complexity ventures far outside just the scope of design. 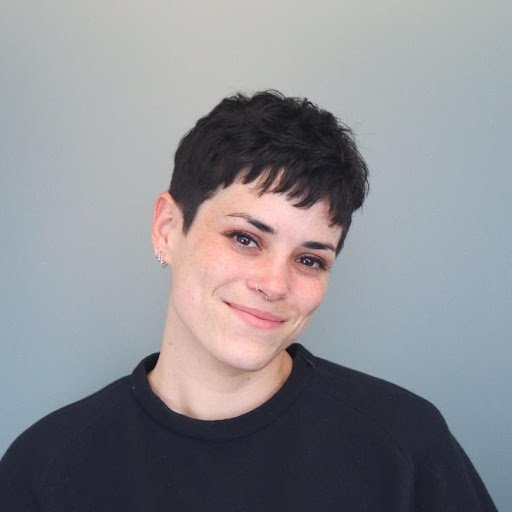 As she began exploring how to incorporate structure and engineering principles in a more interdisciplinary way, she found herself landing a job designing anti-gravity pants for a spacesuit company, where she met her eventual co-founder of AlgiKnit Aaron Nesser. Working and interning all while keeping up with her studies at FIT, Tessa was introduced to the Biodesign Challenge by a professor and ultimately met AlgiKnit’s third co-founder, Aleks Gosiewski.

As stated on their website, the Biodesign challenge is “an education program and competition that is shaping the first generation of biodesigners. We partner high school and university students with scientists, artists, and designers to envision, create, and critique transformational applications in biotech” and it is an international competition. Tessa and her team began discussing what kinds of problems they were seeing with design, issues with the global fashion industry, what companies were already doing, and what potential problems might arise in the future, and how they could start addressing them. After developing their project, the team went on to win the Biodesign challenge and presented their work at the Museum of Modern Art in New York City.

Transitioning her work into a career, Tessa knew she wanted to create tangible change within the fashion and fiber industries and began the process of trial and error to determine which route she would ultimately take. Knowing she wanted to design something impactful, non-hazardous, and that did not contribute to pollution or the accumulation of microplastics in the environment, her team of designers and artists began their hands-on experimenting in a studio.

After testing out dozens of materials and analyzing the production methods and supply chains of various companies, the team knew they did not want to create a product that would require an entirely new supply chain or require a new method of synthesizing polymers – their end goal was accessibility.

Tessa’s coworker, Aaron, has an undergraduate degree in biology which aided in the technical science aspects of the process, and they were fortunate to work with incredible advisors from FIT who oversaw their progress at each step. After hours of research and rudimentary testing, they finally discovered kelp, which would later become the foundation for AlgiKnit. A biopolymer found in kelp can be transformed into fibers and yarns that are then knit and woven into textiles used for many purposes. Although they had started from nothing, there was a clear direction leading their research. Tessa, who became CEO of the nascent and innovative company, and her team wanted to invest their time in something that already had some form of research underway, and kelp was the perfect fit.

As many of you might be, I was amazed by the fact that kelp from the ocean can be transformed into wearable clothing. Interested in the processes that allow for this, I asked Tessa to explain how this can be done, “Kelp is harvested and dried in external facilities that already exist. It is then chopped down and goes through a standard extraction process, depending on what you want. In fact, biopolymers found in kelp are ubiquitous in everyday products – toothpaste, ice cream, pharmaceutical products, and more!” 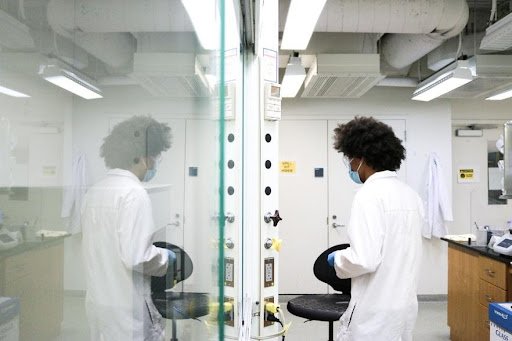 After the polymers are extracted, they are brought into a fiber spinning process to create a “dope” that is of a similar consistency to honey and includes a number of additives. This raw material can then be spun into textiles. Curious about how kelp fiber might compare to conventional materials, Tessa informed me that it is like the texture of cotton.  She said that “a really critical component of new biomaterials is providing something that’s an alternative natural source that isn’t unusual or foreign to consumers – something that looks and functions similarly to what they are already familiar with.” 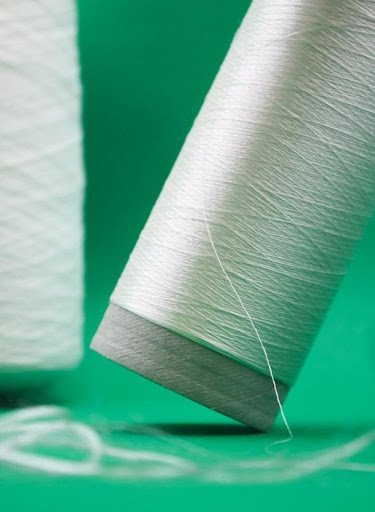 Being that there are countless emerging technologies in the realm of alternative textiles, I was curious to know exactly why algae is a sustainable option. Thanks to many years of environmental science courses, I already had a foundational understanding of kelp and its various functions. Tessa expanded upon my knowledge and educated me about the sustainability aspects, “Kelp is one of the fastest growing organisms on the planet and has a wide range of beneficial properties, from filtering agricultural runoff to sequestering and capturing CO2 to helping rebuild dead zones in the ocean. There’s been a massive push to increase a lot of the kelp harvesting that’s already going on while also continuing to monitor the impacts on the environment.” While kelp harvesting is already an established industry,  as the use of this ocean resource grows, sustainability measures such as preventing overharvesting may need to be established.

The production of polyester, which contributes heavily to carbon emissions and causes pollution from microplastics and toxic chemicals, and the production of cotton, which consumes tons of water, arable land, and requires substantial pesticide use, underline kelp as an ideal alternative.

Fibers made from kelp do not use valuable and increasingly scarce land resources, pesticides, or toxic chemicals, and they do not require potable water resources for cultivation since it naturally occurs in oceans. Paired with the fact that products made from kelp are able to return to the earth and “become the next generation of raw materials,” they embody a circular lifecycle.

When I asked Tessa more specifically about the sustainability of AlgiKnit, she informed me of three core values the company is structured upon: the importance of using green chemistry in their work, upholding sustainable harvesting practices, and ultimately eliminating all of the aforementioned negative environmental impacts of other conventional textiles industries. AlgiKnit is still researching how to recycle and compost products made from their textiles, as companies who purchase their fibers and create merchandise from them often add buttons, labels, zippers, and other components that are not yet made to be compostable or biodegradable.

Currently, the work being done at AlgiKnit is still in development; the team is continuing to innovate upon their already existing methods. AlgiKnit functions on a business-to-business model, providing the raw textile material that is sold to companies who use it to create consumer products. With a total of 17 employees that are divided into product and fiber development teams, AlgiKnit has three labs in Brooklyn that are conducting research and are actively working to expand their technology, scale-up, and ensure that they’re doing what’s best for the planet and the industry. 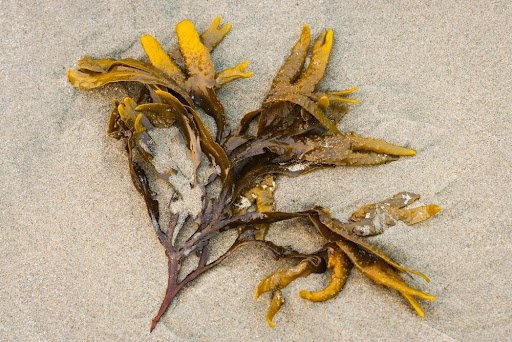 When asked about what she envisions for the future of AlgiKnit, Tessa said she hopes that one day the company will have such an extensive reach that an average person, wherever on the planet, can go into their wardrobe and be surprised when they look at their clothing labels to find a good percentage be of products made from AlgiKnit’s textiles, “The less that people have to make conscious decisions about it and the more that it’s integrated into their lifestyle, the more impact you’re able to have in the long-term.”

There is work to be done around scaling, sales pipelines and relationships, engineering, and more, but AlgiKnit aims to revolutionize the textile and fibers sectors in a remarkable way, transforming them from some of the top polluting industries on the planet into ones that allow us to “live, thrive, and exist” on earth through embodying the circular economy principles we are lacking right now.

Ryan is a rising senior at the University of North Carolina at Chapel Hill, majoring in Environmental Studies and minoring in Spanish. She is thrilled about having the opportunity to join the HoW team this summer, and to provide the world with inspiring accounts of sustainable entrepreneurs from around the globe. Ryan believes that we can bring greater awareness to the urgency of the climate crisis through amplifying their voices in a creative and uplifting way.