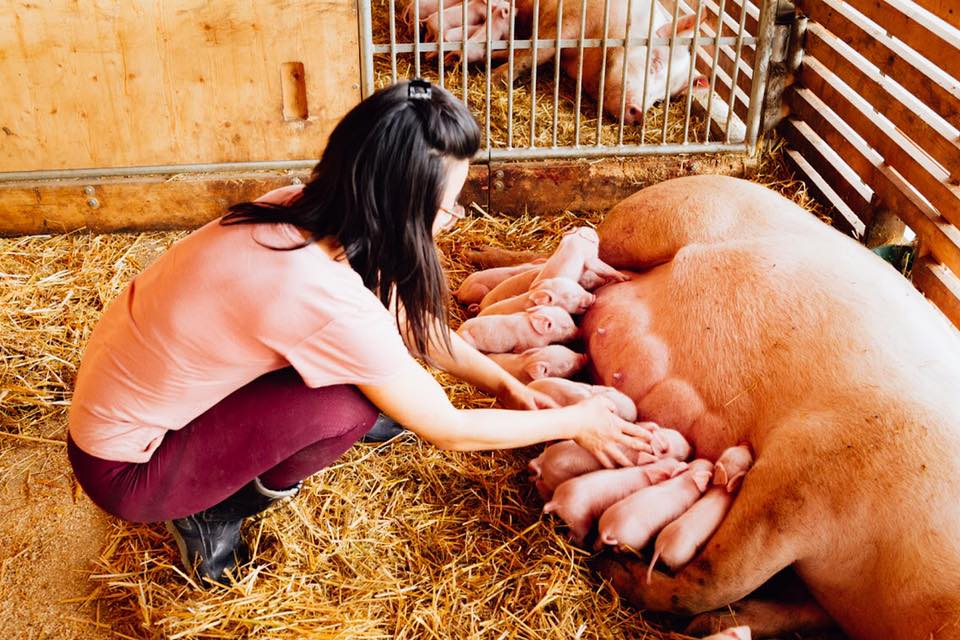 Christian and Rebekka were engaged in one of the most important conversations of their lives.  Misfortune had ambushed their family farm just a month prior, and the young couple stood together at the doorstep of a big decision.

This is a story about how individual commitment helps to cultivate a movement.  Our protagonists are two pig farming families, one in Germany and the other in the United States.  Although they have never met, the Mays and Agers have so much in common.  They wake up early to feed the pigs.  They watch the weather closely.  And they share a common vision.

The Special Responsibility of Farmers

There is agriculture and then there are farmers.  Agriculture is the practice of growing crops and raising animals, creating the food that sustains us all.   Farmers are the people who do the work!

A farmer’s expertise spans an impressive array of disciplines from science to business management and from marketing to finance.  But most of all, farmers understand people’s relationship with the land.  Farmers are not just direct stewards of their own farms.  Their great gift to humanity is that they link anyone who eats (in other words all of us!) to the earth by putting food on the table of people in every country in every corner of the world.  Whether they are running a family farm or a corporate agriculture business, farmers play a unique role in cultivating environmental stewardship.

A Tale of Two Farms – The First in Germany

Christian and Rebekka May loved farms but didn’t intend to be farmers, even though Christian was raised on one, Biohof May.  He grew up in the beautiful and bucolic rolling hills of Junkershausen, a farming village of 100 people in central Germany.  The fertile soil of Junkershausen has not only grown wheat, spelt, and einkorn, but it also seeded an environmental ethic into Christian’s family.

Christian’s parents, Dietmar and Klara, were on the cutting edge when 30 years ago they challenged community norms by putting chemical fertilizers and pesticides away.  The Mays become early adopters in the organic farm movement.

As a young boy, Christian was mentored by his father, and the unspoken expectation or at least hope was that Christian would take over the farm one day, just like his father before him.  But Christian did not believe his destiny was to stay in his tiny rural community.  He went off to university in Vienna where he met his future wife, Rebekka, through a twist of fate when she bought his old mattress.  Then the young couple secured impressive jobs in a big city, Stuttgart Germany.  They had no burning desire to return to the family farm back in Junkershausen.

A Tale of Two Farms – The Second in the United States

Meanwhile, across the Atlantic Ocean, another young couple was making a different decision.  Jamie and Amy Ager also met at university, but unlike the Mays, they embraced the opportunity to return to Jamie’s family farm, which otherwise might have languished.  The Ager’s farm is in the beautiful Appalachian Mountains in the Southeast of the United States.   With idealism in their hearts, Jamie and Amy envisioned agriculture that would connect farmers to their community and grow food in harmony with the environment.

When they learned that most grass-fed meat in the United States is imported from New Zealand, the young couple became farmer-entrepreneurs by launching an organic, grass-fed meat brand called Hickory Nut Gap Meats.   Instead of limiting production to what they could farm on their own land, the Ager’s innovation was to develop an ever-expanding network of farmers to be their supply chain of grass-fed meat.

From the beginning, their business model provided their customers with healthy meat, satisfying a growing demand for sustainably raised food products.  Equally important, Hickory Nut Gap Meats gave its supply-chain farmers more market channels for their products, enabling family farms to stay in business in a sector of the economy that is increasingly dominated by big agribusiness companies.

While the Agers were growing their brand and sending organic meat products to markets further and further away, the May family was struggling with succession.  After one especially intense family meeting, it became clear to the parents, Dietmar and Klara, that the destiny of their children laid elsewhere, not on the farm.

The May family’s struggle turned from difficult to true misfortune.   During a quiet summer night, the pig barn caught fire.  Even though the more than 100 firefighters outnumbered the pigs in the barns, the buildings and pigs could not be saved.   The hard labor of generations was lost in the blaze of a single night and the May family was broken.

As Christian and Rebekka stood together at that doorstep of a big decision, they asked themselves questions like:   How do we balance our career aspirations with responsibility to family?  What is the best way we can serve and make a difference?  Can the dreams of two different generations of a family become one?

One can never wish for tragedy, but out of ashes, Phoenixes do rise.  Christian and Rebekka made their decision.  They stepped forward to embrace their destiny and returned home.  Combining the life-long farming experience of the parents with the passion of the younger generation created new energy on the May farm.  In just two years, Christian, Rebekka, Dietmar, and Klara rebuilt the farm.  Starting from a clean slate, the May family designed pig barns and granaries that are among the most energy-efficient, sustainable, and healthy for pigs in Germany and perhaps the world.

Like so many sectors of our economy, farmers are facing one of their greatest challenges in the history of agriculture: a warming planet.  Along with energy production and transportation, agriculture is one of the biggest contributors to climate change.  Animal waste management, chemical fertilizer use, soil tilling, and poor harvesting practices can all contribute to increased carbon concentrations in the air.   The leadership of farmers is needed more than ever, and we can all draw courage from the new generation of farmer-entrepreneurs that are emerging.

The May’s and Ager’s paths have not yet crossed.  However, I look forward to introducing them since both are dear friends to me.  I want to listen to their conversation when they share their visions of sustainability. As Jamie says, “We started Hickory Nut Gap Meats as idealistic young farmers, and we are still idealistic today.”

Perhaps what fascinates me most about my farming friends is their power to influence the mass market.  Through my work, I espouse ideas on how humanity can solve climate change or advise sustainable entrepreneurs on their journeys, but the Mays and Agers are putting food on the table of thousands of families.  By providing people with their most basic needs, they are connecting us to the land.  With every new customer, the Mays and Agers are seeding the sustainability movement.

Here at the Heart of Waraba, we call it “pride building”, which is the process of bringing more lion-hearted people into the global effort to solve climate change.  Pride building is the opposite of tribe building or “tribalism” which sometimes dominates political discourse in the United States, the European Union, and across the globe.  Tribalism attempts to wield any issue, including environmental stewardship, as a wedge to divide people.  Pride building, in contrast, is inclusive and welcomes everyone to participate, each with our unique gifts in the global campaign to create a healthy planet for today and future generations.

By its very nature of being a global problem, solving climate change will occur through the accumulated actions of billions of people across the planet.  For this reason, the greatest challenge of our generation could become the biggest unifying force the world has ever seen as people across the globe work in their own ways to solve climate change.  Pride building welcomes 7.7 billion people to be part of the solution.  Heroes for the planet, your seeds of sustainability are ready to be planted.

Even though the Mays and Agers have never met, they are tilling the same soil.  Both families recognize that as farmers they are the master link that connects people to the earth.  Regardless of the twists of fate and thoughtful decisions that brought Rebekka and Christian, Amy and Jamie to dedicate themselves to lives as farmers, we all benefit from their commitment. Every customer is another link, and every connection brings more lions into the pride.

Before you know it, we will have cultivated an unstoppable movement.