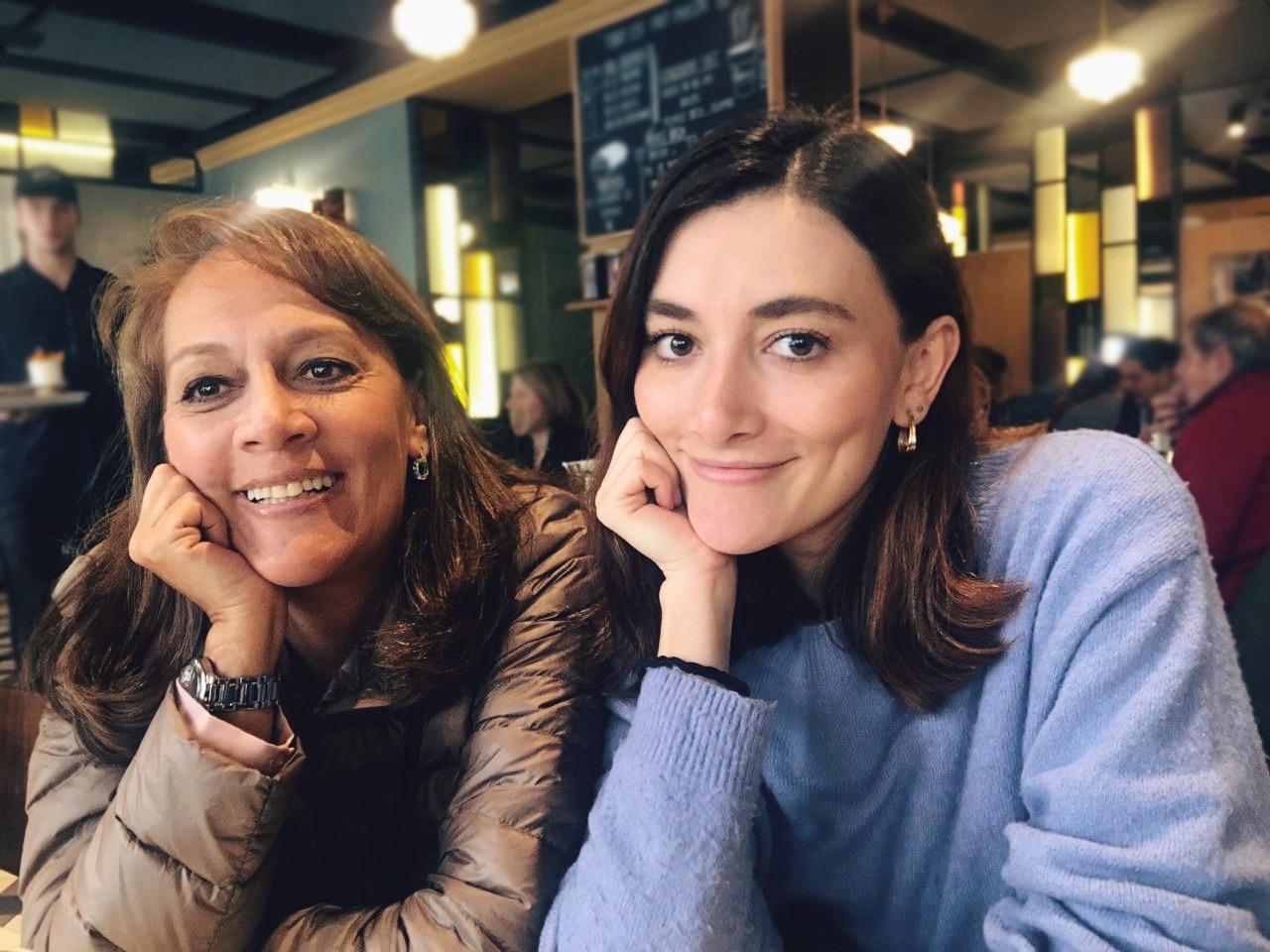 Mother-Daughter Duo Connect to their Roots through Sustainable Entrepreneurship

The fique plant’s strong roots allow the fibrous plant to stand tall and stay connected to the world around them. Like these plants’ roots, sustainable entrepreneurs Laura Goyez Fuentes and María Fuentes stay connected to their culture by selling and promoting Colombian artistry that has been admired around the world through The Palmette Project and Corocora. With customers from Europe to Japan, to the United States, they have provided access to these traditional handmade woven designs, supporting the skilled communities of craftspeople where they come from in the process.

The Inspiration and Creation of The Palmette Project and Corocora

The initial idea of The Palmette Project occurred to Laura after attending Expoartesenías, which is a trade show in Colombia. As a Colombian woman, she felt inspired by the beautiful, intricate designs being showcased, and wanted to bring  these cultural designs to a wider audience. Knowing that artisanship is one of the most renowned and universally appreciated aspects of Colombian culture, there was no better way, or location, to start a company and support her own community. The Palmette Project would provide an e-commerce platform through which artisans could sell their designs and receive stable, reliable monetary support in exchange for their talent. Her mother, María, who owns Corocora, was inspired by Laura’s creativity and pursuit of her ideas. She decided to start a company with a similar business model and sell designs. Both brands, however, are unique in their own ways. The Palmette Project sells a range of products in neutral tones for versatile styling and home decor. Corocora, on the other hand, is full of colorful statement wardrobe pieces that are sure to turn heads on a hot summer day.

The process of creating The Palmette Project and Corocora was a tedious, yet invaluable experience. Laura began by personally connecting to and meeting with the indigenous communities from whom she sources her products, as well as to better understand their struggles firsthand. Initially, she posted a few product samples on Etsy to get a feel for the demand and test out the waters for a more extensive operation. During the interview, Laura laughs, “At first, I actually think I lost more money than I earned.” However, perseverance carried her through the initial stages and she stayed faithful to the potential success of The Palmette Project.

The Palmette Project and Corocora products are distinquished human authenticity. Instead of calculated production from circuit boards and robotic arms programmed to weave synthetic materials together, as found in automated factories, Laura and María have instead constructed meaningful, intentional relationships with the artists.  They started by forming relationships of trust with indigenous communities of artisans. Both companies guarantee that the creators receive fair compensation for their creations and will not be exploited as so many vulnerable communities have been in the name of capitalism. Because of their rather isolated location in many cases, these populations tend to be rather reserved and tight knit. For that reason, it was vital to start off on a positive note. After the initial stages of business creation, they had to direct their focus on profitability, balancing the need to offer fair prices for merchandise with the responsibility of providing artisan support. The companies have been able to donate vital resources such as chairs, tables, and internet connection, creating a symbiotic relationship between company and vendor. Both women agreed that openness and communication were the most vital aspects for the start-up success of their companies.

The Palmette Project and Corocora have been devoted to promoting the stories of indigenous communities as well as prioritizing them in product creation. The Wayuu community, for example, is a community living on rancherías, who severely lack government support. Despite hardships such as lack of decent roads, extreme temperatures, or poor water supply, this community has remained extremely close-knit and persevering. Although philanthropic foundations do exist which attempt to support these communities, the lack of structural support has put them at a severe disadvantage. The Palmette Project and Corocora work to raise awareness of these obstacles, pay fair prices for their work, and steer them away from situations where artisans might be exploited, as has happened often in indigenous communities.

As well as being able to reconnect to cultural roots, the process of creating and running the companies have been a self-reflective process. María realized how important sentimentality is to her, and has grown to appreciate the meaningful connections around her even more than before. For them, having a strong, analytical team with plenty of communication is key for smoothly-running functions. Operations have required a great deal of patience as well: they’ve had to build connections with couriers to ship their products, which has aided in the reduction of a once $30 shipping fee to just $8. In addition to that, they’ve also worked hard to build their brand reputation. Laura even mentioned that it took The Palmette Project nearly a year to cultivate a solid base of positive reviews and a trustworthy legacy. For customers, the beautiful, handmade creations are more than worth the wait for the items to ship to the Northern Colombia hub and then to the final destinations.

The Palmette Project and Corocora work with indigenous artisan cooperatives to buy completed projects and distribute them around the globe through ecommerce. They do not negotiate pricing with buyers nor cut corners to maximize profits. In some instances, indigenous artists have even undervalued their creations and charged so little that the companies counter-offered with higher and more fair pricing for their skilled artisanship.

While each craft is the product of a different creative process, every piece sold is made from natural, biodegradable plant fibers which contribute zero waste, as they can replace non-biodegradable items. The fique plant, which is a commonly used plant fiber, requires relatively little water to grow and doesn’t need pesticides that are detrimental to biodiversity.  The leaves are chopped off of the plant, brushed and shredded into thin threads, and dried under the sun. The result is a durable, light brown thread that is dyed and woven into various items.  The lack of defined seasons in the Amazon makes the fique plant a hardy and reliable material option for Colombian artists.

An interesting aspect of resourcefulness with natural materials and the utilization of every usable part is that secondary benefits can emerge. For example, the fique plant actually contains a residue on the leaf surface that is toxic to aquatic life. Before this was known, unknowing residents would rinse off fique plant leaves into local rivers, accidentally poisoning the animals. However, it was discovered that this toxic material can be repurposed as shampoo for human beings. Harvesting the residue now helps create a circular economy which is mutually beneficial to the community and the surrounding environment.

There are also other materials used for the crafts, such as cotton and mawisa palm fiber, offering different levels of sturdiness for decorations, baskets, hats, bags, and placemats.

Both mother and daughter have a clear vision and goal for the future of their projects. Laura and Maria are excited to expand to in-person operations and promote their products in fairs, trade shows, and market places, just as when Laura found her initial inspiration at Expoartesanías. Laura has also created contacts in places like China, Portugal, and Kuwait to continue expanding and growing around the globe. From the roots of the fique plant in Colombia all the way to the hands of the customers, their job promoting Colombian artistry and culture is a unique evolution in the world of sustainable fashion. 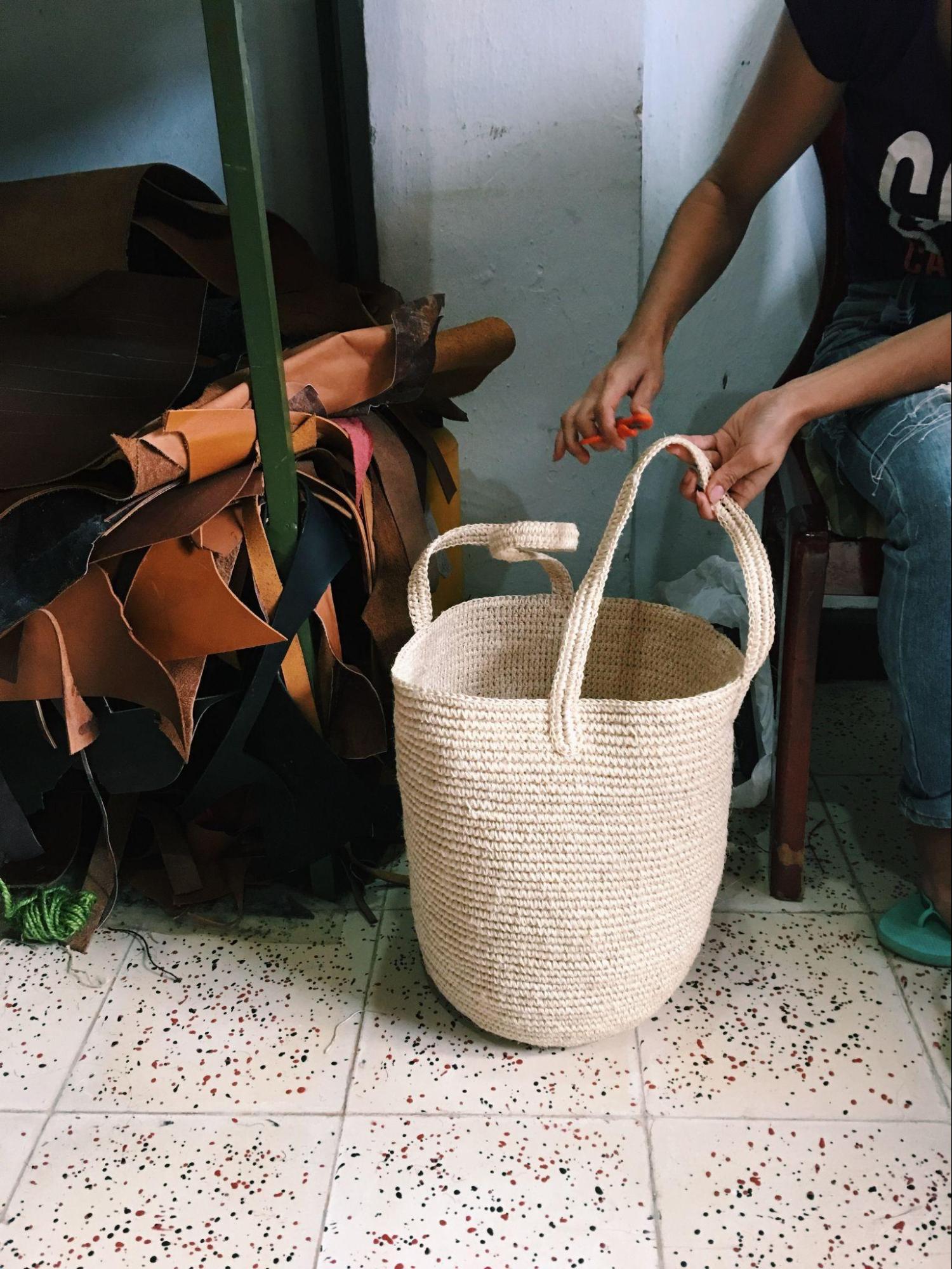 Cobi is a rising sophomore at UNC majoring in Public Health with a minor in Spanish for the medical professions. She is interested in exploring the ways that sustainability manifests itself around the globe, and how a Triple Bottom Line approach (people, profit, and planet) can structurally improve determinants of public health. She enjoys educational traveling, and has studied terms in Spain and Costa Rica. She is excited to gain insight on the creative methods that international entrepreneurs have developed in order to incorporate sustainability into their business practices.