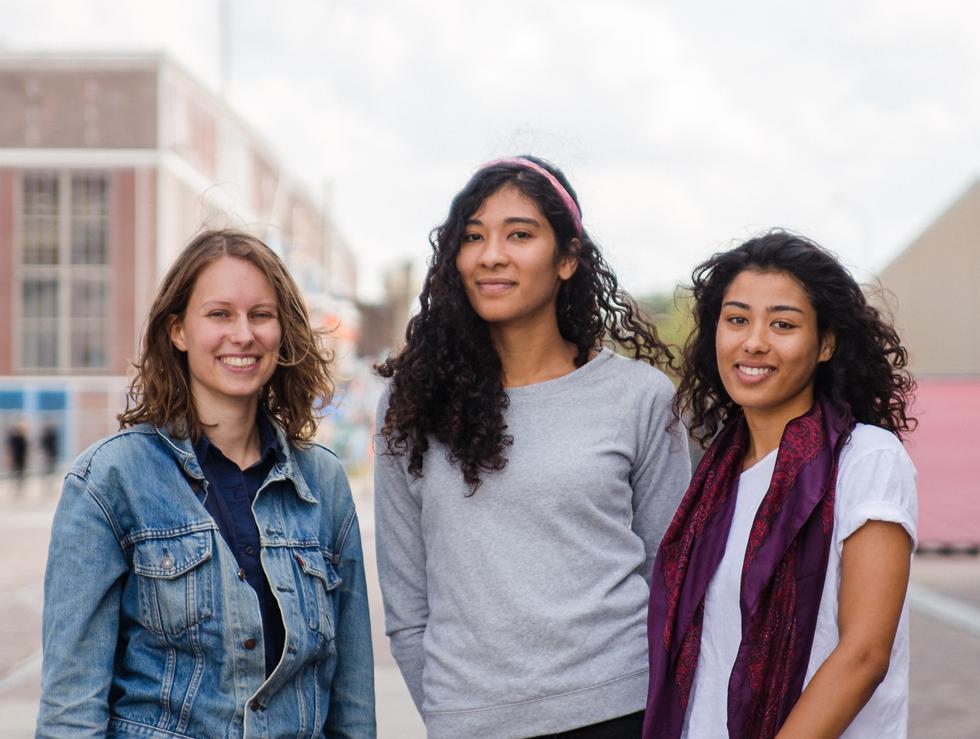 Veenhoven met the sisters when they were all studying at university in Amsterdam. Veenhoven and Marcella Wijngaarden studied physics and astronomy, while Melissa Wijngaarden majored in economics and business administration.

Marcella Wijngaarden in particular was frustrated with “sustainable fashion.” With so many brands, some very small and obscure, it was not clear which ones were best or how to compare them. Veenhoven and the sisters felt guilty thinking that their choices might be unsustainable. They considered, what if we build a website where we collect all the products that are sustainable?! Now, that “what if” has become a reality.

Veenhoven and her co-founders saw opportunity in the lack of sustainability in the fashion industry and launched a company to change consumer behavior.  It began as a student project called “Conscious Clothing” which eventually grew into Project Cece, named after their beloved TV show New Girl and the fashion sense of one of the main characters, Cece.

Project Cece combines ethically-sourced and sustainably-produced fashion items from several brands to help people more conveniently access them. The company supports many climate-neutral brands and those whose business models ship their products with reduced greenhouse gas emissions. Given that the marketing budgets for a lot of these brands is small and even threadbare, Project Cece offers an affordable way for small brands to be promoted and sold. The company also disseminates information through a blog on sustainability topics like reducing plastic usage and conserving electricity to help people lead more sustainable lives beyond fashion.

Project Cece is already a company that people support, helping to transform the fashion industry. Veenhoven said that the best moments are when someone emails them, “I just found your website and it’s really amazing — keep up the good work!” She said it is heartwarming to know that people are finding the website useful.

Even though she did not plan on this path, Veenhoven found that a physics background helped her with sustainable fashion entrepreneurship in multiple ways. One way is that it built her problem-solving skills. She said when her team faces a challenge, they rarely get stuck but instead focus on finding solutions, which is what she had to do all the time when studying physics. Additionally, her physics curriculum included programming, invaluable technical knowledge for running an online company.

Moreover, Veenhoven said physics is male-dominated, so she was accustomed to having to prove herself as a female, which has been beneficial in an often male-led entrepreneurship space. It is just another thread that led to her success as an entrepreneur.

Veenhoven wants her non-fashion background to show that anyone, not just people passionate about fashion, can shop sustainably. She pointed out,

“Of course it needs to be fashionable and cool, but in the end, clothing is for everybody, and everybody wants to look nice at least a little bit.”

Project Cece has been successful putting company values into action, selling several options that are sustainable in multiple ways. While it is true that some products listed on the website are greener than others, they also strive to include as many options as possible, expanding demand for the producer brands. For this reason, they use filters like vegan and fair trade, helping customers to locate the product attributes that appeal to them. Veenhoven emphasized that they do not judge people for what they value, they just cater to different values.

Veenhoven enjoys the products herself; for example, she loves the fair-trade bathing suits on the website which are produced in Portugal and made from recycled fishing nets! Dumping of nets in the oceans has negative impacts on the aquatic ecosystem, and recycling them into fibers for clothing allows new use for this waste material. Veenhoven said she is “drooling” about the summer dresses and sandals. When it comes to fashion, she also tries to be sustainable by limiting what she buys – which is great for saving money and helping the environment.

The Project Cece team prioritizes sustainability in other ways beyond the website, such as    working to minimize their own greenhouse gas emissions and partnering with another company to plant trees to reduce their carbon footprint.  They also support employees’ climate activism; one of their employees is currently part of the activist group Extinction Rebellion.

Trust is really what binds the founders together and to their mission. “We have this purpose of making the fashion industry a bit more sustainable,” explained Veenhoven. Everyone at Project Cece, including the three founders and their part-time team, is enthusiastic about the mission. They have weekly coffee meetings focused on topics ranging from marketing to ethics and everyone is excited to be working toward the goal.

Sometimes, Project Cece has faced an unraveling of trust. The founders of Project Cece tried to partner with initiatives with environmental goals but realized they were taking on more than their fair share of the work. Veenhoven found it frustrating that she trusted those initiatives to collaborate but then they did not follow through; however, she also understood that those people had their own busy schedules and problems. Such experiences remind her to focus her attention on Project Cece’s core business, making her less likely to collaborate with tangential environmental initiative in the future. While Veenhoven knows one must be careful, she thinks that companies that prioritize the environment are generally trustworthy.

Project Cece has a policy that it does not work with brands that only have a sustainable collection rather than sustainability as core to the entire company.  “Otherwise you’re just using us to also promote the products on your website that might not be sustainable, and we just don’t want to be a part of any of that,” Veenhoven explained. In addition, she wants to give support and attention to brands with sustainability as a core value. It makes her angry that most small eco-brands get little media attention, but when a large, mostly unsustainable, brand makes a particular green product, it gets a lot of media attention without recognition of the many small companies who have already put sustainable products on the market.

Starting a business for the first time has been challenging. In addition to understanding business issues like taxes, it was difficult for Project Cece to determine which companies are greenwashing and which are sincere. Several companies advertise themselves to be more sustainable than they truly are, and the Project Cece team had to determine which keywords and certifications are legitimate.  Fortunately, they have achieved enough success and credibility in the market that brands with the right certifications are approaching them.

She added that Europe is working on strict regulations on greenwashing that will require companies to uphold sustainability claims, which should make it easier to build trust in the fashion value chain

In the next five years, Veenhoven hopes Project Cece can expand throughout all of Europe. She and her partners also want to continue to grow the number of fashion brands that they carry. As they grow, Veenhoven shared that they will have to increase their human resources department to continue maintaining and building trust with each other and future employees.   Moreover, she wants to promote sustainability work, even for competitors.  Though competition can make entrepreneurship more challenging, she said it

“was always a moment of growth for us because we were all very motivated to put in the extra work to show that we were the most amazing platform.”

Fortunately for Project Cece, several competitors have quickly folded up shop, while Project Cece has had the tenacity to overcome difficulties and work toward the goal.  Their ability to build their website themselves gives them independence and saves capital. While entrepreneurs must struggle up the learning curve in the first few years of launching a business, such lessons can set the stage for future success. Veenhoven and her co-founders have learned a lot along the way. They have made mistakes particularly with taxes, which they now understand better. They also learned to “ask for money a little bit earlier in the game, because we were doing it free for quite a while and we were really scared to make that switch. But I think it’s really important, especially in this space to ask for money for your services, because otherwise you’re just creating unfair competition for other people doing something similar that you do.”

Veenhoven said one exciting entrepreneurship memory is when the website went online for the first time. As part of a sustainable enterprise is to be cash positive, another exciting moment was the first time they asked for money for their services.

Veenhoven loves working with her two partners because, as sisters, they are close and bring fun energy. She was a bit nervous at first because she expected them to always take each other’s side, making her the minority in disagreements, but that has almost never been the case.

“The three of us are all quite different people. But we have a lot of the same views and we’re very respectful to each other in business decisions,” she explained. They trust each other’s judgments if one person feels strongly about a decision. They all believe in the company and are willing to work hard to make it successful.

Threading the needle of trust will continue to allow Project Cece to weave a growing fabric of more sustainable fashion throughout Europe.